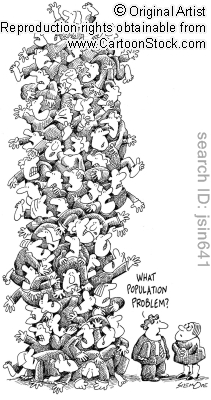 As L Junior shouts in her loud shrill voice- " Families are big, families are small", all i can do is smile...Ah! Families...They can be anything- big, large, extra large, cute, bad, loud, silent but they can never be SMALL! I wish i was born to Chin Mun Ho or Hu Jintao even, but not in India. Families in China are uber cool, super small- One family, one child. Alas! our forefathers had nothing proper to do, rather than enjoying their hobby- playing Dad! They loved to play the Daddy's game again and again that catapulted India as a major player in population. Little did the Government do to control the population, that by the time they woke up to reality- a nation bursting to its seams with people, enough damage was done. The machinery got to work overtime to stop Daddy's machineries going on top gear. Pro natalistic attitude took a back seat in the 80's when wherever we went, we were hounded by NGOs and Government advertisements begging us to follow Hum dho, hamare dho. This was of course followed by poor Daddys who found their wallets shrinking.
Even as China and India embarked on sterner drives to combat population explosion, Indian families continued their quest for that son who would carry forward the family name. Awaiting that baton bearer, Daddys and Mommys had many more girls on the way. What not did the Government do to stop us? They tried to teach us contraception- the youth hooked on to it instantaneously. They taught us abstinence...What abstinence? Hahaha! We abstained from using condoms. They installed vending machines to sell condoms, they gave tonnes of condoms free everywhere...( so much so that we saw little children play balloons!) but the average Indian male refused to budge.
Proactive thinkers we are- aren't we? We were advised of sterilisation and vasectomy. Our super egoistic males refused to even listen about vasectomy. As women, we bear the brunt of population control measures- almost 60 to 70% of us are subject to sterilisation, whether we like it or not! Another sizeable amount of women bloat and suffer the side effects of IUDs...all just because, Daddy wouldn't stop his game, or play it safe...Boy, would we love to trade places with men, when it comes to family planning issues. Now comes the morning after pill that finds its way to the most inopportune places- you know where. Even following all these, we are giving a stiff fight to the Chinese, we sure will beat them here. What if we can't beat them at the Asian Games? We can beat them at daddy's game! Go India GOOOO!!!
And following suit is Daddy Beckham...The Beckhams have been branded "bad example" for families. No, no, not because of the soccer antics of Mr Beckham or the fashionista Victoria. It is just because the Beckhams have just added their fourth child to the family. 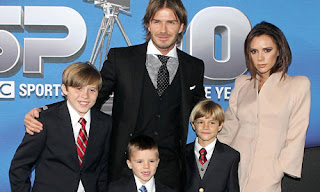 Poor Beckhams...anything they do, negative press. I say, we give amnesty to Beckhams. We make them our role models in welcoming that baby girl!  We shall send them to Rajasthan and Bihar to educate the importance of girl children. Daddy Beckham must be made Brand Ambassador of Girl Children. Every girl child born will receive an autographed soccer ball from Daddy Beckham and a signature Beckham perfume free for every girl child from Victoria! We Indians are suckers of freebies and so...a soccer ball and a perfume can do the magic of curtailing female feticide and infanticide. Playing the Daddy's game is just cake walk, these days. Who cares about population explosion anyway? Cancun and Copenhagen forgot the issue and so let us too conveniently forget. After all, as per age- old Indian values, " Children are Gift from God- the more, the better!"