I seriously don't understand why i chose to write on this! To a puritan soul who once thought Puppy Love synonymous to loving your pet puppy, reminiscing the little titbits of teen life brings a happy warm glow. Ahem! There, i am a puritan, i have declared already...This story happened long time ago, when i was in school, sporting two pig tiny pigtails and a loooooooooong pinafore. Thank God, I was not wearing braces and a funny thick rimmed spectacle. But for sure, I was a dull head when it came to puppy love or calf love. I had heartfelt interest in academics and i excelled in it. As for the other teen 'happenings', i remained totally oblivious to numerous puppy loves blossoming around me. 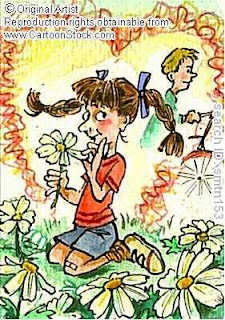 Brought up in a typical South Tamil Nadu conservative household by a very disciplined teacher- mother ( how unlucky- I had to tolerate the duo in one!), I was prim and proper. So much that i had transformed into a Tom Boy. I took special antagonism against girlie girls who sat in the last benches, giggled a lot at nothing and bunked classes whenever they could. If there was something i loved the most, it was competing- fighting with the guys whenever i could get the tiniest of the opportunity. I pounced on every occasion to belittle the opposite sex and the Love was indeed mutual! Except for a few overtly mature boys, the others ridiculed and tried to provoke the tiny Tomboy who was like phosphorous out of water!

One fine morning, i was confronted by a boy of my class, with a piece of paper crumpled into a tiny ball in his sweaty palms. He must have thought- Should I or Should i not? a thousand times before he promptly handed over the paper to me. I, all of fourteen years, mistook it to be a prank and got it. Only when i read through the three words scribbled hurriedly on the paper did it dawn on me that it was my first love letter! Dumb head! I deposited the letter promptly to my mentor in school. The puppy love stricken guy was beaten black and blue. Poor guy. I really feel so sorry for him now and would ask for his forgiveness if i ever met him again. The raging hormones in pre teens can do funny flip flops and can make you go insane with infatuation. Sad, these Tom boys arrive late at the puppy love station! By the time they arrive, the last train would have left with the X mark at the back...

Do all these puppy loves die a silent death? Definitely no. There are some who settle down with their puppy love partners. But how come you wake up every morning, dreaming of the same ol' face for decades, starting from your teen age, is something i can't comprehend. I read somewhere- Puppy love will lead you to a dog's life! Years later, when after innumerable match making attempts, i met L, strange things indeed happened, Yes! I was very much infatuated, to the man destined to waste(!) his life with me. Every furtive glance we stole, every word that was said, every tingling touch- ahhhhhhhh! Love came a bit late, but boy, it was not puppy love. It was something destined to last a life time, or so i believe. 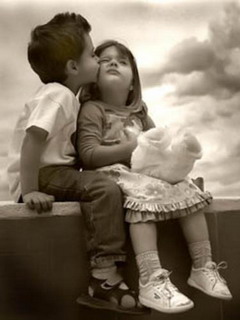 What is your take on puppy love? I would love to have some feed back on some puppy love you came across or you heard of...
Posted by Cloud Nine at 00:27

Email ThisBlogThis!Share to TwitterShare to FacebookShare to Pinterest
Labels: personal