A Lay(wo)man's Guide to Chamchagiri

Almost 14 years of yeomen service to the nation's wheels and its ever demanding, always demeaning customers... Looking back at the path that I have strode, all I can feel is numbness. The heart ache and sourness has happened only because I have nothing to my credit, except for a service record that screams out red brighter than Taylor Swift's red lipstick! Looking for an outstanding green entry in my service record needs a telescope the size of moon and a periscope the size of earth!

Alas! The favorable awards that everyone seems to be receiving at official functions with smiles that outbeat Rahul Gandhi's famous losing smile remains a distant dream to me. So, that brings us to the question, how do some people always succeed in excelling in everything they do, especially scoring those extra points over the mundane and ordinary?

You can always identify the 'award- winner' by a simple glance. He always remains the shadow of the boss in your office- never mind, your boss may fart, this shadow never leaves his back, not even twitches his eyebrow over the hydrogen bomb dropped ;) So much for his Bhakthi! Our 'butter'man or chamcha is always by the side of our 'Sup' aka supervisor, casting worried glances at the simple two line leave letter that you put on his table for his approval. He is the personal scanner cum identifier of the Sup, he scans your letter for any error- grammatical, emotional, protocol errors. Only if the scan is complete, does your letter gets through. 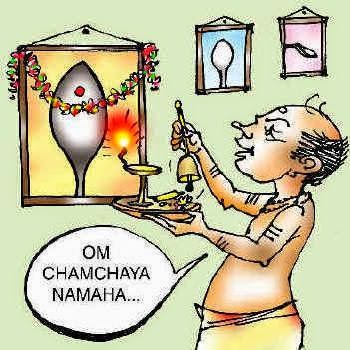 A letter as simple as, "as I am suffering from fever kindly grant me one day leave" would have seen a heated debate on the veracity and authenticity of me getting a fever off season, 101 reasons as to why I ask for a leave during peak summer, including a botched abortion doing the rounds. By the time my leave is approved, our chamcha would have grown the size of Rajinikanth's cutout on Mount Road, on the release date of Kochadaiyan in the mind's eye of my Sup. Enna Rascala! MIIIINNNDDD IIITTT!!!

Mr Butter man is one crazy guy. The sup wants a soap, the fellow stands at his doorstep soaping his pet dog that poops straight on butter man's foot. Does he mind? nah! Butterman knows always what tastes the best at which restaurant. He is a connoisseur of fine dining. He knows which joint has the sumptuous biryani, which restaurant has the softest dosas and which joint has the yummiest halwas. The Babu wants a handful of jasmine for his bobbed wife, our butter man plants a basket of flowers on Her Majesty's bird's nest hair. The Babu wants to attend a temple festival, our butterman awaits him at the temple door even before Our Lord Renganatha wakes up from his slumber.

The boss thinks of his chaai, our butterman stands by his side, fanning his piping hot chaai. The looks butterman sends to the Sup can put Marilyn Monroe to shame. If he had a tail, boy would it wag;) But in work, butterman is one awesome hard worker! He will be the one who plays dominoes while the whole office around him is on fire. Deadlines will be met, targets will be achieved, entire office will go beserk, but our butterman remains oblivious to all these, discussing his boss's 143rd love affair with his 23rd secretary who had warded him off like the bubonic plague!

1. Wake up before your sup and send him some stupid forwarded good morning message.
2. Find out what soap your sup's puppy uses and stand on his doorstep holding the soap in a basket, bit by your molars.
3. Buy freshest brinjals, not the BT variety, but organic farm grown brinjals and ladiesfingers from the local flea market and impress the Sup's wifey.
4. Clogged drains, leaking taps, stinking bathrooms- whatever smells awful, your sup must go 'dhak dhak' remembering you and your six-pack abs when you wield the pipe wrench and toilet hose.
5. Always be updated on the latest gossip in office of the who's dating who and pass on all that sensual grape vine juice to your sup.
6. Keep your nose tightly closed when the sup farts. You can instead close your eyes and remind yourself of Axe deo and angels falling from Heaven.
7. When the sup picks his nose, or itches to remove that stray piece of chicken in his teeth, be there for him with tooth pick and tissue...oops...it should be in the reverse order;)
8. Always be Gandhi's three apes. Close your eyes, close your motor mouth, close your ears and close your *hole. Your sup has the sole rights of opening all these, the last of these he always does...
9. Be the first to report anything to the boss. Be it the birthday party of the secretary's third puppy or the guys night off where alcohol flows like a river, be ready with your mobiles to catch the hottest and latest and transmit data to the boss, faster than Chitti the Robot.
10. Last but not the ultimate golden rule- Your sup is always right. His left hand is always his right hand and his left foot is his right. He has no left. Everything in him is right. He is right brained too- never can analyse and calculate. But don't you worry. When everyone is served peanuts, remember, you the butterman will receive the awards and the rewards!

P.S.: Ouch! I know it is one grumpy post, but serves someone right;)
P.P.S.: By the way, someone please tell me how to remain calm, cool and composed while sitting opposite to the person whom I am mentally thrashing to a pulp and flushing down the public washroom!
P.P.P.S.: This post is written for the genuine pleasure and happiness awards at mybheja.com :P Please comment on how you have tried chamchagiri and failed miserably. We are one bunch of losers out here ;)
Posted by Cloud Nine at 23:11 14 comments:

I am omnipotent. I am omnipresent. Any picture you get hold of in my neighborhood, you can see my toothy smile. Hordes of albums overflowing the closet will have me and only me. I am crazy- 'picture crazy' or rather 'posy-crazy'. I love to see my shadow everywhere. I adore me, no matter how bad the mirror growls. No matter how much my bike's rear view mirror abhors, I love looking at me. I love posing for pictures, I wish I could push the bride and bridegroom away from the reception stage, if it is decorated with my favorite orchids and lilies.

I simply love me. I love the camera better than anything else in the world- no sir, the falooda is no match to the shot where I hold rare orchids and smile! Cloaked in megalomania, I attend all family functions with a desire to look ravishing...dashing and what not. The moment of glory allures me as the newly married couple go left right and away.

The queue of well wishers with bouquets and gifts snakes down the entire hall and I can feel my make up playing peekaboo. First it is the sweat on the forehead trickling down, peeling out the powder and then mascara follows suit. It is the eyeliner next...my eyes wear their own self inflicted dark circles and by the time I reach the stage, voila! I look directly out from Mars. The cameras happily click away and I plaster a million dollar smile to my face, along with the dripping makeup colors. I love smoky eyes...one can't say if you have tried deliberately to ape the witch of a horror movie. If you get to see the picture in the album a few days later, you will regret stepping on that stage ever!
Life ain't so bad, mademoiselle! I am a sucker for flowers and waterfalls and butterflies and mountains. Imagine posing with a yak, with your mouth twitched in a so-called smile, while all you wish to do is shriek at the top of your lungs and dash away. Poor yak! If only it could talk;) I love blowing bubbles and wish someone could click me blowing bubbles the whole day, 24*7. There was once a poor lad stuck with me who finally did a Houdini act when I waved at him for taking the 1214th picture blowing bubbles!

I can bend 180 degrees for that perfect lighting. I can stand on all fours to make a flower look close to me. I can rotate my head 360 degrees to pose for a panorama shot. I can kill a fly if it is anywhere inside the frame of my camera and I can be still and silent for a full minute if someone is clicking away my picture. Imagine....o-n-e-f-u-l-l-m-i-n-u-t-e of silence from this motor mouth for a picture! Now I know why husband dear loves to click my pictures often!
I love exploring peculiar shots in wild wild forests. I am a walking leech magnet and they just love my O negative blood. The suckers always know when I try for that perfect 'greeny green' shot and cling to me like the death itself! Do they deter me? Nah! I look perfectly alright and smile away while my inner mind and brains go exploding at the thought of some blood donation camp I put up for the leeches;)

I suffer from acrophobia. But that doesn't deter me from posing over the cliff overlooking rolling meadows where grazing sheep look like small white balls. That doesn't irk me a bit when I cruise in the cable car clicking away selfies like mad, all the time while my insides shake like leaves in a storm. That doesn't stop me from depicting my favorite mudras atop temple stairs, as my salwar billows and wind howls in my ears.
The best thing about my photo craziness is the patience I learned. A lifeless beach, a 'no one in the frame' snow capped mountain, a secluded and serene park where the lonely woman..ahem...me, sits pondering at the yonder grasslands...all those pictures smile at me back whenever I pick up my hard disk after a hard day. The smiles and fond memories keep flooding back. To this happiness, I can endure any number of leech bites, panic attacks, heart failures, temper tantrums and wedding receptions! A toast to the most beautiful, graceful, lovely, heavenly, flowery, shining woman- ME! Yayyyy!!!

p.s.: Post after a long gap. Echoos me ladies and gentlemen. I am enjoying a summer vacation sans the kids;)
p.p.s.: All nail- biting and cussing...not for the 40 something bachelor or the 56 inch chest chaai baai. It is reserved for the CSK Vs. KXIP! India is one cricket crazy nation, full of 11 billion 'as you name it' Mr Bernard Shaw!
p.p.p.s.: I love the power cuts. Brings down the electricity bills, you know*wink*