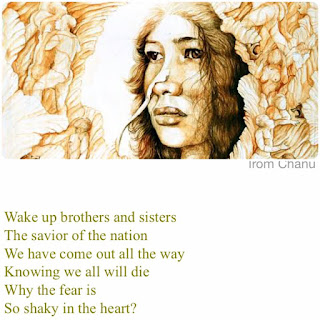 A woman pushed, scorned...
Hunger can be a weapon,
So you have proved...
Point well-made, Mengoubi.

Year after year we've lived
Birthdays and candles,
Happiness and tears-
All that have eluded one woman.

Today as you break the fast,
I salute the undulated spirit,
The courage and the bravery,
All that is Irom Chanu Sharmila❤️
#iromchanusharmila
Posted by Cloud Nine at 09:02 No comments:

Email ThisBlogThis!Share to TwitterShare to FacebookShare to Pinterest
Labels: poetry

How many times have we women just closed our faces, scorned at the stench and rushed past "water-loos" in public places? Ours is a strange, strange land where we worship snakes and cows, beating our women black and blue. We'd rather keep emptying our bladders at the nearest lamp post than enter the 'foul smelling' public urinals.

Men of our land are a peculiar species by themselves. Their bladders are specially designed with noise sensors. The moment the noise rises a few decibels outside, they hunt for the place and open up on their own volition. Sala, haven't they heard about the word control? Ji Haan, our men know how to control everything- their doting mothers and bulldozing wives, but they just don't have an inkling of controlling the bladders.

How I wish our Babas teach them 'bladder control' instead of controlling their desires and weaknesses of mind. Unleashing a desirous bladder in public glare gives an exhilaration incomparable to the 'exhibitionists'. The stop-me-if-you-can look that we've almost seen on every pissing face is just another gender role assertion. See, I get to whip out what I've got and relieve myself, I am quite a man! Don't you dare to do anything remote near that, you're a woman!

It so happens that while a few are really desperate to clear the bladders, some are equally desperate to flash at the hapless women who jump all over the wee puddles lining up the walls of every bus stand and station. The corporations can handle this- easy, easy! All they need are bamboo baskets filled with the "magic powder" straight out of Harry Potter's wand. We call it bleaching powder. The bleaching powder rangolis dotting the road side work as a charm, only for a few hours.

One of the 'lose bladder' guys decides he'd like some fun in pointing at the rangoli's middle with his piddle, the game of "throwns" ensues. Take aim, shoot. Unsuspecting women who cross the area can only shut their eyes and run for their dignity, fervently praying for some Krishna to give her a cover. Toilets have been refurbished, crores have been spent and contracts have been awarded to maintain them in public places. Still, our stingy cows are wary of spending that proverbial 2 rupees needed to take a wee. Modesty is the luxury of rich people you see!

Someone announced they found gold traces in cow urine. I sincerely wish he did some more research on those lines and 'discover' platinum in the piss of men. Heck yeah! That would make them piss in secret, lest someone steal their piss! Or we may invent "urinavoider" visor for women that sets on their skulls and snaps shut the moment they sense piss 100 meters away. Better still, we could line our public places with gun-trotting women police who are armed to the teeth to bobbit the exhibitionists.

The next time you feel like emptying your bladder in an open public space, dear men of our country who'd love to piss in public than kiss in public, please spare that 2 rupees and get a room!