The Queen Of Hearts- Part 8

The birth of the little Prince Vijayarengakrishna brought immense pleasure and happiness to the battered souls of Madurai, especially the Royals. Mangamma was elated and donated gold worth millions to the Meenakshiamman Temple. A golden crown encrusted with diamonds, rubies and emeralds adorning the principal deity, a golden chariot for Kallazhagar, innumerable tanks and ponds dotting the Madurai landscape…her thirst for service and devotion remained unquenched.  In the midst of all such hectic activity, there was a soul that remained detached from this hullabaloo, distant and silent. Mangamma failed to note the frail and diminishing health of Chinnamuthamma. How much ever people tried to pacify her over Rengakrishna’s death, she remained melancholic and sad. On the thirtieth day, the infant was named Vijayarenga Krishna Naik and prayers offered in the temples throughout the Kingdom. The very day he was named, Vijayarengan took his toll- the life of his mother!
Chinnamuthamma who was left unattended during the naming ceremony of the infant, had consumed rose water- a huge quantity of it and slept through the night. The next morning when her aides tried to wake her up, she was running high temperature. Slowly she lost consciousness. The efforts of the Palace doctors to revive her were in vain. Murmuring Rengakrishna’s name and with a dream to be united with him in death, Chinnamuthamma breathed her last in a week. As Mangamma held the orphaned infant in her hands, fighting back her tears, her mind remained strangely blank. Unaware of his mother’s death, the infant wailed in hunger and Mangamma was struck with remorse. Rengakrishna and Chinnamuthamma. Her son who loved his wife so deeply and her daughter in law who could not live without the love of her life…Even in the adverse circimstances, she could not but admire the love the young pair had for each other. A pair in the Madurai Naik dynasty that was so much in love- she could not help but look at Narasappaiah and shake her head. Destiny…now she believed in that. 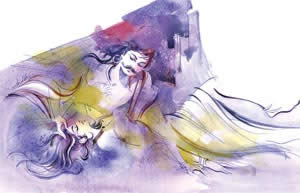 It took just two hours of deliberation in the Royal Council to decide the next course of action. Without much ado, the Royal Court approved Queen Mangamma as Queen Regent of Madurai and the three month old infant Vijayarengakrishna as the King of Madurai! Yawning and stretching his hands the little King lay on the throne of Madurai, as the crown was symbolically placed on his forehead before being placed on Queen Mangamma’s head. Long arduous years were ahead, Mangamma thought in hurtful silence, as the little one kicked his arms and smiled at his grandmother. A grandmother at forty, who had the responsibility of holding the reins of the most volatile Kingdom, warding off advances of Marathas, Maravas and revolts from Travancore, she mused. What a cruel twist of fate! When all she wanted was to retire gracefully and spend her last few years in visiting temples down South and up North, all she had got now was a wailing infant to feed, guide and rule a Kingdom…
When summoned to the Palace training grounds by the Queen, Narasappaiah had run and re-run his speech in his mind a hundred times. He knew what Mangamma was going through and he wanted to comfort the poor soul. She had always maintained a decent distance with him, he was the Guru of her son, a Teacher, someone who taught her the nuances of politics and public service. It had been ages since he had heard her laugh and months since he saw her smile. This Mangamma was a ghost of the past. As she sat on the arena, watching the horses trot in circles, kicking up dust, she was reminded of a sword fight-  the duel between a hooded Mangamma and King Chokkanatha.
Where is that courage and determination now? Dear God, please help me, guide me in these tough times and let me keep the Naik flag flying high, she thought. Seeing Narasappaiah in the distance, steadily gliding towards her, she felt half her strength return. What would she do without this man? The man who was destined to be with her life long, not as a partner, but a Guru. Would she fail him? Would she fail the Naiks? Would she show herself a weakling confronting the warring factions? The invaders? The Mughals? Marathas? Facing the Dalavoy, she felt all her doubts leave, all her inhibitions fade and all her problems evaporate in thin air. What if she lost Chokkanatha? Rengakrishna? God had blessed her immensely with this man- her pillar of strength, her shoulder to lean on, in distress.
Wishing her, he stood wondering what was going through her mind- a battered soul who never found true happiness all her life. He was reminded of her happy, carefree childhood, when she used to run over fields and meadows, hunting honey, wild flowers, chasing butterflies and fireflies. The worry lines on her forehead spoke volumes of how life had been cruel to her. Mangamma regarded him for a split second before speaking out- “ Dalavoy, Ravi Varma had refused to pay our tribute this year. The Generals who had been sent to collect the dues have been badly mauled and sent back. He had said he wouldn’t pay tribute to a land where there is no King. I would not tolerate such revolts easily, Dalavoy. I want you to gather the army and head to Travancore, collect what is due and teach the Raja a lesson, a lesson he would not forget all his life. I wish I would lead the army, sadly, I have my own bundle of worries to take care of. Vijayarenga needs me now. The army must move in two days.” With this, she waited for his answer. Narasappaiah was moved by her love for her homeland. Her love for her grandson. “ I promise to bring what is due to us and even more, Queen. Raja Ravi Verma needs a lesson on respect, and I shall teach him. I hope the little King is well,” he replied. “Oh, he is just adorable!”, she smiled. For the first time, he saw her genuine smile which was indeed infectious. For this smile, he would fight anyone- the devil himself, he thought with a smile and left. Would he fight death himself?
It took Narasappaiah and the Naik army a fortnight to reach Travancore and when a caution was sent to Ravi Varma, he laughed. A caution messge from Dalavoy Narasappaiah- a warrior for a land with no King. Narasappaiah had his game plan ready. It took him few tolas of gold and a few promises to disgruntled generals of Ravi Varma, to collect the tribute. And what a collection it was…The Travancore Palace lost every ounce of gold it had, every piece of jewel it possessed to the brave Dalavoy Narasappaiah. The army carried cart loads of loot from Travancore to Madurai, with Narasappaiah leading the way. He had a special gift for the Queen, all cannons of the famed Travancore King. They were mounted successfully on the forts of Madurai and Tiruchirapuram.
Few years later… 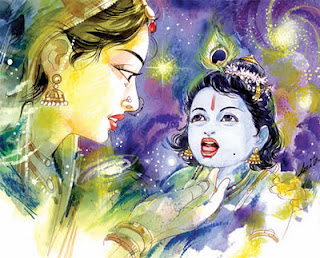 Little Vijayarenga loved to travel. He liked to explore the unexplored, discover the undiscovered. As he ran tiny capers along the Courtyard of the temple, Mangamma trailed behind, lost in thought. “Look, amma…temple tank! I want to go on a boat ride now……” he yelled in his shrill voice. With a staunch refusal, Mangamma and Alarmelamma pulled him and he ambled along pouring his childish heart out. When they reached the gopuram ( a monumental tower in all temples), he wanted to climb on top of it. “Let us go this once, amma…”, he pleaded with tears in his eyes. Her grandson, the only hold for her in the world and he wanted to climb the gopuram. How could a loving grandmother refuse? Holding his hands, she climbed the steps one by one and finally the duo reached the open terrace of the temple, a few floors above. As she stood near the parapet wall admiring the streets below, Vijayarenga followed her doggedly. Then, both his tiny hands placed on her back, with a mighty shove, he pushed her down. With limbs flailing and head reeling, Mangamma was swiftly falling to death from the high rise temple….
With a loud shriek, the Queen woke from her bed, with rivulets of perspiration running along her temple and a cold shiver running down her spine.
TO BE CONTINUED...
Posted by Cloud Nine at 23:43