What plagues women working in Railways...

The plight of an average working woman is something that we all come across everyday, starting from people in our own families. Women working is nothing new to us, but the nature of jobs of late that women undertake and the frequent night duties that keep them away from their families and children is something that i would like to ponder on. Having witnessed my own mother and her mother, my aunts, all working women, usually lecturers in colleges and teachers in schools, i was prepared for taking up my job with Railways. Hardly i was aware of the fact that my duties would require night shifts and working in remote areas. I have worked in the most unlikeliest of places- my first posting was in a Goods Yard and i can remember those days climbing in and out of Broad Gauge and Metre Gauge Wagons counting sugar bags, cement bags and paddy bags. My feet used to look jet black after a visit to the Coal Dock where coal was transhipped by mere shovels! Then i moved on to Reservation Office, where the shifts were sort of okay, morning shifts were from 6 am to 2 pm and evening duties from 2 pm to 9 pm. I used to lock up the office at 9 pm, hand over the keys to the guard and take a lonely walk to my hostel. Then came the trial of working in Booking Office that issues unreserved tickets. 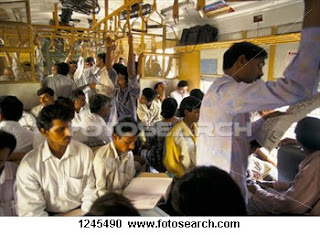 Now Railways have the duty of issuing tickets at any time of the night and i am for it, no second thoughts on that. But the duty rosters that require women to work on long arduous shifts is a bad omen. The British left the roster system and it is sad the Railways follow it verbatim to date. The 48 hour duty a week is split into fragments of hours a day and includes two night duties from 8 pm to 6 am. Shuffling so frequently from work and home, i find many of my colleagues' lives disasters, always driven by roster.

Women with little children are at the risk always, resulting in wide spread sick leaves and absenteeism. The job itself is highly monotonous, i can remember only the repeated Tut Tut Tut Tut of dating machines in lonely booking offices. The Booking counters are often away from the Station Master's room, mostly on the other end of the platform and spending the night alone locked in a small room with company of bundles of tickets and books is not so inviting. I had spent a full night's duty in Srirangam Railway Station in the company of an unclaimed corpse! And most Railway stations in remote areas often lack washroom facilities, i was stuck in Bikshandarkoil, a CNC station ( Clerk In Charge Station) were only snakes kept company on rainy nights, the nearest washroom was a waterman's quarters half a kilometre away! There are many stations today where the nearest bus stop is more than half a mile away. And women working alone in these stations is down right inhumane and atrocious. Still many of our folk work with conviction, not for the unjustly low wages paid, but for the pension they will receive after they retire. The Government jobs have lost sheen with the latest generation, mostly because of these rosters, funny duty hours and the constant gossip mill that works over time here.

Consistent night duties for women puts the family at risk, we have to rely on others to take care of our children and mornings after night shifts make us more disoriented. All this is only for the Open Line Staff, the women who work in Railway Stations. There is another Blessed Lot who are unaware of these suffering women totally, the lucky ones who have found jobs in the Office Section. They have a 10 to 5 job and even there they are unable to sit glued to their seats for more than an hour! All business take place here- right from Diwali chits to saree sales. These lucky lot in their rainbow colored attire always look down upon their blue saree counterparts who toil in the open line as untouchables. As if all these travails are not enough, there is rampant sexual abuse and obscene overtures at every turn for these women. Each Supervisor has his own sexual whims and fancies, men who think any woman who ventures out in search of work is simply " AVAILABLE". Their obscenity starts from passing lewd comments to using the unisex washrooms with doors open! It grows on and on with every passing day as women grit their teeth and learn to just ignore it. I can go on and on for pages and pages on this rampant sexual abuse episodes, that which i personally came across or about which i heard of. But i am not someone to be silenced and someone who can ignore this and walk away. Whatever i come across, i deal with it with force and as for the submissive women, i really think all they need is the guts to face things bravely. As for those retarded morons, a slap in the face would suffice. But they use their next ultimate weapon- character assassination. No one is spared here, mind you, especially the widows who take up duty on compassionate grounds. There is absolute dog fight among men to 'control' these poor women who join work after their husbands' deaths. Shame on these men! Many women who staunchly speak out against such abuse are branded as women without character by these morons and shunned by their own women folk. Though away from work for almost 3 years now, i dread the day i have to join duty back in Railways.

The cursed lives of these women move on, the rail wheels go clitter clatter!
Posted by Cloud Nine at 13:42