This post is seriously...ahem...dedicated to my dear brothers S and R;)


I am almost plucking all my hair in despair...Dealing with a beloved brother or sister is a real nightmare especially if you are the eldest. My dear brothers made sure i ended up half mad, fixing alliances for them. The elder one did crazy things so  much that i felt dealing with a lunatic in full form! When young, as siblings, we were a very happy lot, playing blame games and had fun complaining each other to Mother. Let us call the elder one S and younger one R. S by nature was a trouble monger, but was so diplomatic, always landing blame either on me or R. R had always been in the receiving end of Mother's Love *wink*wink...S hoodwinked Mother so much, she believed R and me were always troublesome. We together broke a wall clock- ahem, it was rather I, when playing cricket in the living room. Together we dumped idlis- our daily breakfast, on the lofts at home. After five years when the painters ended up with a box full of dry idli balls, all Hell broke loose. I still vividly remember the thrashing received that day! Ouch, that hurts! We broke a sofa(!) and ended up as an unceremonious pile on the floor. Enter Mother with a broom...I could see she was fuming but one look at us piled up on the floor- she burst out laughing. And we too, went by the game. 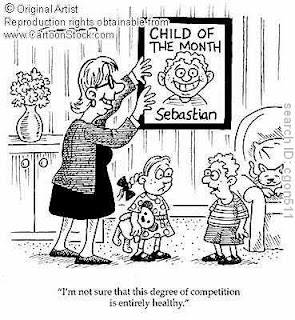 S was fiercely overprotective and possessive. Every time i wore my skirt and left from home, S's scrutinising eyes peered and scanned entire area for trouble. All this, when he was younger by a good four years! Argh! Sigh* Mother tried to discipline us by promoting healthy competition...ahem...But what got promoted was full fledged wrestling for the Mamma's child post! How much ever we did fight, S ended up Mamma's darling and  me and R the unfortunate tyrants. As years passed, fledglings grew wings and flew away from home and Mother, but still, there was the same undercurrent of rivalry and I must be better than my brother or sister syndrome! 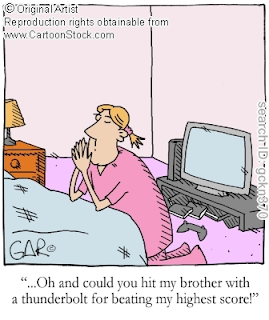 All our rivalries came to an END when Mother died all of a sudden. The only person who loved to see children better each other in competing was dead and gone. Her death forged us together and as the eldest girl of the family, i was left with two unsettled brothers. As we laid her to rest and stood praying on her grave, i received my own Enlightenment! Gone was the feeling they were my siblings and rivals. They looked more vulnerable, small and unprotected. S and R are now my own children, or so i feel. And may be this has given me the Mother Hen attitude! I keep picking at them both for all their little escapades and i know they hate me like Hell for that. The worst part came when S married.

Oh my...how did he behave? He wanted everything done His way! Starting from the wedding card, the mangal sutra, the garlands, bouquet, the wedding attire, stage decoration, everything had to be done His way. I remember certain gruelling episodes then-
1. He started from Trichy at 4 am and dumped me in Tirunelveli  ( 350 kms) in exactly 4 hours- at 8 am. I was belted to the seat, fully reclined and was counting the bones when i alighted down the car!.
2. He wanted a wedding card in baby pink with a pink rose on it, with a golden tag and pearl. We went to Lovely cards Sivakasi at 10 pm, when the shutters were half down and spent well over  two hours selecting his card! By the time we left the showroom, entire Sivakasi was in deep sleep!
3. S wanted bouquet only from Tuticorin, as he loved the bouquet my husband brought for me. Now a trip to Tuticorin and along winded by-lanes, a severe woman- hunt for the lady who did my bouquet. We finally located her after a day's search and ordered the veil and bouquet exactly as per S's preference, off white and gold combination! The icing in the cake was S's funny fight at ten o clock in the night, a day before the wedding. S argued that his bouquet was not so glittery as the bride's. Now, it was R's turn to take a lightening visit to the nearest shop to buy glitters. I remember pasting glitters on his bouquet at twelve midnight! 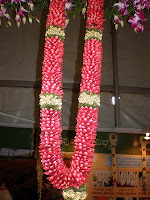 4. S wanted a rose petal garland unique to Coimbatore area. My darling wanted it from Tirunelveli. Again, a ride to Tirunelveli asking every florist if they knew how to tie the special rose petal garland...Finally one of our childhood friend's relative agreed to it, after seeing the pictures! Poor florist! He went to Madurai to learn how to tie garland- S style!
5. S wanted his bride to have unique flowers- orchids! Orchids? Oh well, he might have thought, let sister dear arrange it from Western ghats! We managed to locate a florist in Chennai(!) and the sprayed orchid travelled 16 hours before  reaching our place!
6. S loved crackers- the louder the better, the colorful the best. So, another purchase from Sivakasi- direct from the wholesaler.

7. Ah..then came the wedding attire- the entire wedding resembled a fashion show- traditional coats for wedding, blazers for engagement and Sherwanis for receptions. All purchases in Chennai- another trip, stay in hotels, purchase in boutiques, slipper hunt for the bride, bindis, hairclips....*sigh* why the Hell did he not marry in a Registrar Office?
We had travelled more than 3000 kms for S's wedding and spent 3 months of meticulous planning. And how did i start for the wedding? My freshly permed hair still in coils! Applied nail polish in the car and on S's wedding day, i forgot to keep flowers in my hair- considered inauspicious by my grandmother....argh! Extra adrenaline and pumped up BP, i wonder why i did not have a heart attack when the garland did not arrive on time! The inlaws of S refused to welcome him without the Machchaan malai! R who went to collect them from a location 60 kms away would have given Schumacher a run for his money in Grand Prix! S refused to get down from the car without garland and i had to run from dining hall to his waiting car, armed with idlis and chutney, splashing sambar on my new designer saree...Awwwww man, how i hate S...*gritting teeth*...

And now history repeats itself. It is R's turn now and he is not at all helping me, by refusing every girl we show him! I am totally at loss as to what type of girl he likes. Whatever be the type, it is ultimately him who is going to live and him who is going to be my next Wedding nightmare. As i brace up for the next innings, all i can wonder is Dear God, why did you send me first?