This story is about that teeny-weeny file. Yes, you heard it right- A FILE. That Khakhi folder that folds your fortune for weeks, months or at times even years...The journey of a file is by itself a (mis)adventure! If the file sits in a Government Office, the journey can beat the Adventures of Sindbad. Twists, turns and unexpected drama that drives you to the edge of the seat... 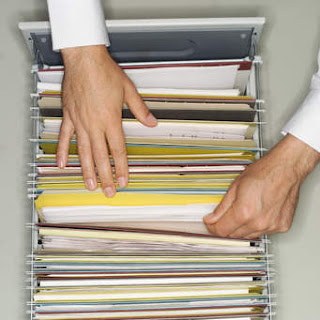 Now you mustn't forget gentlemen and equally gentle women, the synonym for railways is redtape. Any file in Railways moves at rail(snail) pace, strictly! Unless the file is a complaint on a poor clerk or a penalty/punishment file. The latter one moves like lightning...or rather faster than sound, putting supersonic jets to shame! This happened few years ago when I had to go abroad to live with my husband, on a special Ex India Leave from Railways. Now this leave requires a No Objection Certificate from various sections, including the Chennai Zonal Office.

Like the hutch pug puppy, I was glad to watch the file being tagged, labelled, shunted in and out of various offices for almost three months in the confines of divisional office. It was like watching a volley in a tennis match between Federer and Nadal, right, left, right, left. Every single day, I walked the corridors, smiling at people, cajoling some, begging some and threatening some to get a glimpse of my darling file. After all this surveillance, my darling file moved from my place to Chennai Office. Hooray! Finally. She went by Rockfort Express and here was I praying for the entire 800 odd passengers and mail plus my file to reach Chennai safe and sound.

The ordeal was not yet over for my file. I waited patiently for two more months. My better half was getting bitter as I was wasting precious time in getting permission to leave the country. And my darling was not yet back. That is when I decided to pull up my sleeves and get to work, trace my file. Tracing a file? If I had the resource, I would have written volumes on 'how to trace a file' now. Poor me, with the hopes of discovering my file, I boarded Rockfort again. Little did I know that discovering America was far more easier to Columbus than me discovering my file in the sunk titanic that we call our Zonal Office.

Tonnes of records, kilos of dust and two days of unrelenting search finally led me to an office assistant who knew where the file exactly was! " My "Eureka" was probably louder than Archimedes'. Thankfully I was not in the tub, but the corridor of railway office. Sensing my relief, the assistant 'sir' now scratched his head. Taking the cue, I offered a Gandhi. He shrugged his shoulder in disgust. Oh...this was one gentleman, I thought. A penny for my thought, he winked his eyes at me, motioning me to the far end of the corridor. He showed mudras which I, even a trained bharatanatyam dancer couldn't understand. One full minute went by before I understood- the guy wanted a Napolean badly. 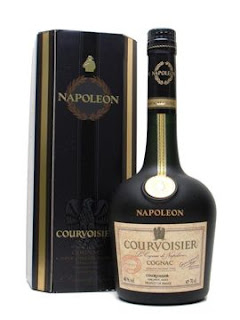 The Warlord Napolean must have turned in his grave when I looked at this man incredulously- " Who is Napolean?" Two hours, one full Napolean and half a biryani later, I was reunited with my darling file! Tears stung my eyes as I retrieved her from the hands of our Napolean 'drunk' Bornaparte. Two more days of volleying and finally I was returning back to my place hugging her. The journey from there was smooth- my file finished her " Around Railway Offices in 180 days" and rested on my lap one fine evening. As my flight took off from Chennai International Airport, I was dreaming of my darling file who bade me farewell. Without her, I wouldn't be on board the flight.

The art of tracing and retracing a file is by itself an art- you need loads of patience, tonnes of perseverance and truck loads of luck. The file of a property transaction deal required four months and two sets of bata slippers @ 999.99. If there was not one honest Officer, my file would be sitting like a lame duck in some Tahsildar's table. Husband dear is a Ghazni Mohammed by birth. Despite my experiences in file chasing, he has now applied for 'patta' for our house. Hail Mary! Week after week it will be now chasing the file, which I do without much ado;)

Worse still, my leave letter file is now making me moan and groan. Her Highness was submitted to the due boss on 5th June for leave from 15th June. She has now done her Houdini Act- gone missing. After constant snickering and pestering friends and foes, I managed to trace her today morning. She is sitting under the table of my boss, gathering dust, waiting for my boss's pen to kiss her goodbye. I wish I could hold her...touch her...just inhale her essence- the FILE- my LIFE!!

p.s. : I really am bitchy writing this post, forgive me...a woman has the rights to bitch, right?
p.p.s.: Had a tough time in RPF outpost today trying to 'prove' I was a Railway staff to a knuckle head who thought he was probably Sherlock Holmes who found out that I had left my bike in a "No parking' Zone. Man...we are women! We are supposed to park in 'no parking' zones only :P
p.p.p.s.: How I hate men who look at 'assets' alone when they speak to us...Dear God...let all those men who look at us lurid, be born in their next birth as men with copious 'assets' that can put a cricket bat to shame!!!
Posted by Cloud Nine at 14:29 16 comments:

The next time you plan to bang someone cute, careful dudes and dudettes, the Court is watching. Funny, to imagine, the lady with the balance waits by your bedside trying to decide if the chick you just banged is over 18. And, dude, you sure are above 21, aren’t you? If no, then you can drink and make merry, kid. You can have as many casual flings as you can and the Justice isn’t bothered. And just in case you are over 21, you are royally screwed, my man!

The new ruling of Chennai High Court is a truly landmark judgement. “If any unmarried couple of the right legal age indulge in sexual gratification, this will be considered a valid marriage and they could be termed husband and wife.” What an amazing judgement! Hail, Milord! What if I wake up in the morning with no idea of being married to the bartender or the item girl :P 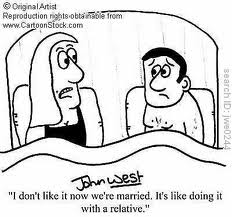 I can hear them conservatives jump up with joy at the ruling. “ That will put them youngsters at the right place. Chi. Chi. So many live in relationships, casual flings…now they will know of our culture”. Oh yes…now the number of one- night stands and casual coitus will dwindle…how scary! I am not that naïve to say one got to wait for the Mr. Right to learn what is sex. But why do we Indians have the passion to always relate sex and marriages? For God's sake, sex is just sex and marriage is something that has to last longer. Not to be decided or proved in a Courtroom! And how the Hell does one prove they had sex in the confines of one’s privacy? Film it?( Isn’t that pornography?) Or rather take sleazy pictures of the act and put it on the Court’s noticeboards?

And what is the relevance of family and the ‘mangal sutra’? The saath pherahs, the agni kund, the chain that ties the two goats (ahem, read mutually consenting adults for sex)together? Does the Court say they have no relevance or they are shitty waste of time and money? You want to get married, simple, get the chick drunk, bang her, take few pictures and voila! We pronounce you man and wife! Or the other way…you find a well settled man, a little indecisive and you are over 18, want a secure life, just start living together;) The Court will guarantee you a happily ever after…provided sense prevails and your man sticks to you. 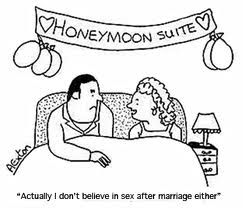 What happens in case ‘such lawfully wedded couple’ need to break up after a one night stand? Simple- apply for a divorce, live a year in separation and two more years clearing the legal hassles. All this wait for one night of sex? By the time you get your divorce, boy would you have wished you never had a sexual apparatus in your body!

I am totally baffled…the teenie-weenie youth would now be banging their heads on bedposts, thinking- “to have or not to have”…rather “to wed or not to wed”…It would be better if the judges concentrate on clearing the cases on their benches faster than creating such ‘landmark’ judgements. And let us leave the institution of marriage outside the purview of sex. Please!

p.s.: So what is the rule for extra marital sex? Any clarifications? Just interested :P
p.p.s.: You are going to be seeing me more from now on...beware ;)
p.p.p.s.: "More" above means i am weighing a whoppy 80 kilos :P
p.p.p.p.s.: Sincere condolences to celebrity cook Nigella Lawson who was manhandled by her husband in a restaurant. Lady...better watch what you cook :P