It happened again today! I sit cringing in the counter when the teen sways casually to her own rhythm and reaches the exit. As if on a trance, all eyes follow her back- men in awe and women, as usual in envy. Her low waist jeans and stretch tops are the cynosure of every eye in the small hall and the pretty teen knows that fully well. The extra sway of her hips say the story and i shake my head in disbelief the hundred and twentieth time this week. Women these days, especially the teen aged little angels seem to be treading on the ramp rather than the roads. I curse my day when it starts with a peekabo of my neighbor clad in nightie. Aged more than sixty, ti is funny when madam dear sweeps the threshold in red nightie. I almost died controlling my laughter when my colleague aged forty entered office one fine morning draped in a salwar. I am not a conservative who says saree is for women. It is a wee bit odd to see otherwise saree-clad elderly women in salwars.

Teens are ruled  by dress code these days. Colleges and Universities have specific dress codes and students ought to abide by that. I am glad most girls wear sarees and salwars to colleges rather than the dangerously perched jeans and catastrophically hiked minis. I was mortified in shame when i saw a teen in a busy shopping mall flashing her builder's bum in a low rise. How responsible parents of Indian households, who profess strict virtues when it comes to dress, handle such youngsters is appalling. When i was hovering in the threshold of youth, i was strictly forbidden from wearing jeans. After much pestering and begging, i was granted a dull blue jean that started from the chest and extended till the ground. I loitered around the streets sweeping floors with my jean. And a word about the skirts too. They resembled 10 feet trains of wedding gowns! Whatever, i have swept my house with my jean and skirts till i was swept off my feet by husband dear! How decent is the skirt and jean depends on individual's perceptions. I totally agree.

Women these days dress to kill, not cover up. It is not uncommon to see middle aged women flaunting muscles(?) in jeans and youngsters revealing calves. We in India have the freedom to dress as we like, but should we be the cynosure of all eyes in a mall? We can dress for convenience, not to get Neighbor's Envy, Owner's Pride! Covering up doesn't seem to be the priority now, the trendy fashion statements is the In Thing. Kollywood actresses and their fashion fundas, Bollywood fashionistas and their wardrobes have become our latest craze. Lechchumi of Attaiyampatti who weighs a good 100 kgs wants to be a la Kareena Kapoor. 100 kgs can never become a size zero. So what can poor Lechchumi do? Simple, wear a hipster and frighten away the poor cattle of Attaiyampatti! So much is our copy craze we forget we are setting bad examples to our children. We forget to think about other women who suffer in silence, who simply do not have the freedom to dress as they wish!

Iran's women soccer team is world renown. The girls have the same Gulf craze for football. And any idea how they dress up and play? All draped up, not a millimeter of their bodies exposed. Want to see a portrait of an average Saudi gang of girls? Here it is- 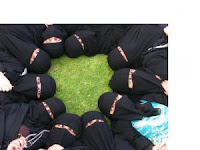 We seem preoccupied in attracting attention than feeling comfortable. Next time thinking of wearing that hipster and tank top, just think of the pictures above. There must be a dress code for every person- he/ she must herself design that code- The Code of Honor!