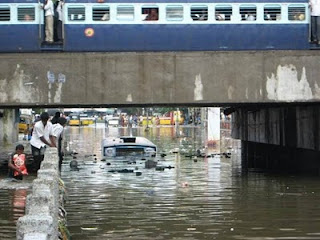 Floods have nowadays become our most irritating monsoon guests. Having survived two major floods- one in Tamiraparani in 1992 and another in Kaveri river, 2005, i have experienced the force of nature. Memories of Tamiraparani floods in 1992 were still fresh in my memory when Kaveri stuck us in 2005. I was in my tenth standard during the first flood, Father was trapped in a train that was stalled at Kallidaikurichi bridge. Then there were no mobiles and we had no information from him. There was a power cut, no drinking water at home, Mother and the three of us sat the whole night worrying about Dad. He finally arrived the next afternoon, hungry, battered and after a marathon walk of 11 kms, after the waters had receded. The worst affected part was Pothigai Nagar in VK Puram, nearly about 40 people perished, there was an infant fully covered and left in a loft near the ventilator. The roaring waters did not leave the infant and the parents, all died. Luckily some good samaritans swam and tried to pull out people from flooded homes, where water was up to the ceilings. Mother volunteered for flood relief work then, carrying food stuff and clothing for the people living in the river banks high up in the mountains. As flood waters never touched our home, i did not know a flood's fierceness then.

My entire perception about floods was just little water entering your house and receding in a few hours. The flood of 2005 took us completely by surprise. My daughter was a month old baby then. My husband and my son were both playing when water suddenly started flowing into our portico. It was flowing on the roads for about a week and so i did not attach any importance to it. After 4.30 pm, the flow was much faster. Worried, i called my friend two lanes apart asking if we could join them in case of any emergency and she happily said -" Yes,no problem, you can come, our place is near the road, so high that flood waters will not reach here." Satisfied with her reply, holding my son and carrying my daughter with one day's dress supply, i left off. My father came home then, by this time the waters were covering the three footsteps to the house. Both my husband and my father then had the job of securing all electronic goods. The fridge went atop the dining table, the washing machine sat on the cot, my mixer and grinder, all occupied the tables. Both our two wheelers were hoisted inside the house. By then, the waters started raging and both the men almost dashed to my friend's house, leaving behind a locked house and a untethered pet dog.

Came a swirl of water inside my friend's ground floor, so abrupt and sudden we had no time to think. Grabbing my daughter i almost ran up the stairs to their first floor. There was only one bedroom there and i felt so imposing sitting there. Now we were three families perched precariously on the first floor, with the flood plundering the houses and ravaging anything it came across. All power and telephone lines went blank and we had only mobiles to contact people outside. We waded through the ground floor to get to the kitchen for stove, dosa batter, oil and utensils. Those dosas were the scariest meal i've ever had, with river waters roaring beneath. Water did not recede the next morning, but Father wanted to see if our pet was safe in the open terrace. He had to swim to and fro in the flood and bring our Ronnie back. The scene he saw at our home was a nightmare, waters flowed to the height of our compound gates, our car was totally submerged in water and Ronnie was wailing in the terrace. Pulling him by the collar, Father swam back to us. Ronnie was so happy to see us that he yelped and yelped and danced around us.

Good Samaritans and local armymen came sailing in temporary boats to give us bread and drinking water. The waters did not recede till the afternoon, when we decided not to impose upon the kind friend. Carrying my daughter and son over our heads, we started wading in the waters after calling my brotherinlaw to help us shift to his home which was safe, 17 kms away. We all looked kind of funny in wet clothes, Ronnie struggling behind, looking like people from Mars when we arrived at the Central Bus stand which was dry like a desert, receiving a free ride in a Government disaster management vehicle. It took two days for the water to drain out completely and when we took an assessment of our house, it was disheartening. The white tiled floor now looked dark brown with silt, lot of water snakes and rodents were happily splashing around inside the house! My Uncle came from Karur to help us clean the mess. It took three men and a week to clean up. The car repair cost us 75k, both two wheelers that were submerged cost us another 5K, the two electric motors another 10K, all sarees and dresses in the last two drawers of my wardrobe were simply thrown away, the forgotten VCR emitted silt and water when lifted, all beds were wet and reaking with flood odour. Personal loss was to the tune of about a lakh and the Government gave us 10 kgs rice and 2k as flood relief!!!

May be our experiences with the floods made us wise to build a room in the first floor. And after encountering two of these, i am a little worldy wise, do not seek material wealth-  that is what i felt when i ran with my children in a nightgown:)
Posted by Cloud Nine at 00:53