Every person alive would be dreaming of his house- own house. Whether it is a pint sized shack or a sprawling regal mansion, dreams of a house continue to enthrall us. Building a house is worse than marrying the one you love- so many obstacles come your way, nurturing you as a steeple chase champion! Ask any one who has built a house just now- tch tch...the narration would be of trials, tribulations and tortures by builder, architect, plumber, mason, electrician, painter....an entire army of tyrants! And when the house is a little spacious, that inner being will act smart, asking you, pestering you, taunting you- You have a big house man, now why not rent it out? And your friends ( read foes) who arrive for your house warming ( they would have secretly wished it to be a house burning ceremony!) advise you on minting money with the newly built house. 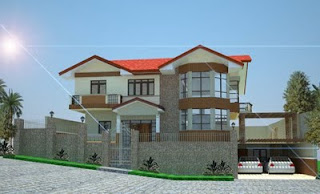 Madamji who already looks down at you as an useless piece of furniture sniffs her nose and wets her eyes with her saree pallu, telling some distant bloated relative- I know, i know...he is not that smart...if he were smart, he would have built this house ages ago! Arey madamji, if you were that smart, would you have married her in the first place? That bloated woman relative has stuffed a whole chicken and done her job well. Madamji turns to the opposite side of the bed and refuses to even look at you! Your first day( night!) in the new house is ruined thanks to that aunty! You love to stand for hours at all vantage points and admire the house- your new love! Madamji continues her Bed Satyagraha until you relent one fine night, in letting your house's first floor for rent.

Madamji promptly supervises putting up the TO LET board and then arrive the steady stream of visitors. You can see wide variety of them- madamji rejects every possible decent tenant you like. It is madamji's appun ka choice, you know! After much deliberations, altercations and harrowing fights, you agree to let it out to Madamji's approved tenant- the man with no job! The entire family looks like having come running from the psychiatry ward, they behave like zombies. They invite you for their house warming function, nevertheless. And you indeed go there and watch the fumes of Ganapathy Homam engulf your living room. The tenant's pet doggie scratches the wooden door as it likes. Controlling your ire, you walk out to office in foul mood. Madamji doesn't help it at all, when she calls you up promptly at lunch time and shrieks out in a shrill voice- "They are driving nails into the wall". Your curd rice comes back to your mouth and you gulp it down with anger. 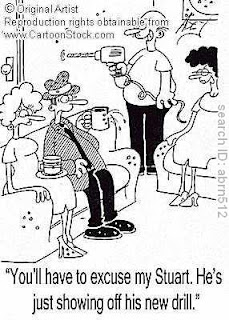 The brrrrrrrrr and grrrrrrrrr of the drill greets you when you arrive home.The zombie tenant is in no idea of resting the drill, it seems. You try to reason out with him and say- no more nails. Bugger is unmoved. You return home as usual as furniture, incurring the wrath of Madamji. Tenant one finally gives up drilling and the next time when you see his living room, it looks like a photo studio! Finally the zombies decide to vacate the house after a year and the moment you set foot after they move out- you faint! The kitchen has never been cleaned ever! An army of roaches and mice greet you and the oil layer on the kitchen top takes a week to clean up! Sick to the stomach, you give up cleaning on your own and call up help. Your Saviours clean the mess, repaint the first floor, change the door and charge you the entire rent that bugger might have given you. Next comes the Mr Scratcher. He makes a point to scratch your car every time he parks his two wheeler in the portico. When he moves out, you decide to let out only to single women. And enjoy(!) the feeling of used Carefree dumped in your backyard!!!


Argh! Now you really are fed up and decide to have some decent bachelor guys. So decent, the rogues always forget there is a front gate to the house. Climbing the gate and pipes seem very funny to those apes. And the trash they throw up ( literally!) includes Johnny walker who walks all the night and Napolean who is always at war with you! Ah! There ends your thin patience. No more tenants, Madamji pleads you. Finally you decide- Not to let. Don't let out your house, let you Rest in Peace! And every time i see a TO LET board on a brand new house, i send my silent Prayers to the Heavens Above!!!
Posted by Cloud Nine at 12:51