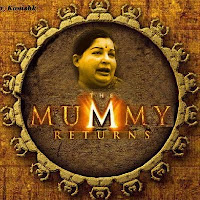 A thumping victory, almost no opposition and Captain's Company- Amma will sure rock Tamilnadu (literally) for five years to come. Honestly, no one ever expected a demure and seemingly pleasing Amma to win such a landslide victory dethroning the exi(s)ting Royal Family. Democratically the trend of such super duper majority is not good, anything the AIADMK feels will be a LAW now. So what happens next to us, the poor common Tamil men and women? Oh, shut up and watch the game!

Day 1 after the verdict: Amma asks her CM room and other Ministers' rooms to be ready in St George Fort, the old Secretariat abandoned by erstwhile First Family. So, the whopping 200 crore new secretariat in Omandurar Gardens is now totally free! Kuppan and Suppan can tie their buffaloes in the Ministers' chambers and graze them in the lawns. How sweet! Amma is the only person to think of buffaloes in Chennai city, who can get only Shakila and Namitha posters to eat. Now, thanks to Amma, they can munch on the grass of Secretariat! Chennai's traffic woes are world reknown- now Amma's convoy will be a regular feature everyday. All flights above Chennai will be grounded, all vehicular traffic on Beach Road will be stopped and all ships in Chennai harbour will be anchored till Amma's convoy starts from Poes Garden and reaches St George's Fort. Amma's safety is our ultimate concern- you see.


Poor Kannagi! Karuna and Jaya have made it a point she never rests in her Eternal slumber even after centuries! Amma removes her statue and Karuna installs it. Every five years she comes to Marina and then goes missing. Probably Almighty God will have mercy on her. He would breathe in life and make her walk back to Madurai from Chennai. Azhagiri Anna would love to have the statue installed in Thirumangalam! Poetic justice, indeed. But to install Kannagi's statue, we need Anna at home in Madurai. Going by Amma's speed, i predict Anna would end up in Puzhal, either in KP Krishnan's murder case or the Dinakaran office torching case. Or may be Anna can request to have Kannagi statue installed before his cell in Puzhal, reminding him of Anni!

Amma will provide us all the freebies promised-
1.  Free laptops for all higher secondary students ( Facebook will have a field day!)
2. 20 kgs rice for all ration cards ( who will give us oil and lentils?- drink porridge daily!)
3. Free cable connection for public ( oh yeah, Karuna gave us free TVs and now we need free Cable, for sure!)
4. Free mixer, grinder and fan ( along with 3 hour power cut a day!)
5. Military force will be deployed for electricity theft ( so that Amma's aides can steal everything else. Does the military know this, by the way?)
6. Below poverty line people will get 20 litres mineral water per day ( Give them water to wash their behinds first, Amma dear!)
7. Poor will get Rs 25,000 along with 4 gm gold for marriage ( oh...my! why did i marry at 24? The astrologer told i shall be wealthy if i marry at 33...I should have listened to him, then. Silly me! I lost 25000 bucks and 4 gm gold.)
8. Senior citizens above 58 will get free bus pass. ( Oh yes, they were the only people missing in the peak hour traffic. Why not add them to the rush?)
9. Kattil Thatha scheme ( Grandpa in cot scheme) for aged people abandoned by their wards.( sounds just perfect, Amma can find a place on retirement from politics!)
10. Government sugar mills will be enriched ( well, enrich Midas Golden Distilleries, as well!)

Personally, Amma will now have to aircondition the cow shed in Poes Garden- the cows are tiring soon in the heat. Imelda Marcos will probably fly in to give some ideas to Amma on stacking shoes. Last time i saw them on TV, they looked outta fashion. Who else can advise Amma on shoes other than Imelda? And how can we forget Amma and UPS? Amma needs UPS to stay charged- Udan Pirava Sahothari! ( unrelated sisters) Sasi and Family will now rule the roost, we can hope to see many more pictures of the Sisters together garbed in Diamond Ottiyanams!

Governorji will now be a much worried man, he wouldn't like to end up like Dr Chenna Reddy. It would be better if he keeps half a mile distance from Amma. Only our Amma has the guts to accuse a Governor with molestation charges. Femme fatale of course- beware Barnalaji. Oye ji...thoda Ammaji se hatke rahiye ji...Our next five years will be filled with fun provided by Amma- there will be sentimental scenes dripping with tears, you can see Karuna crying- Aiyo kolrangale! Aiyo kolrangale! flashed on Sun and Kalaignar TVs. There will be emotional court scenes where ex DMK ministers would try to defend their honour. Tens of thousands will be losing jobs with a single signature of Amma. Beware Tamils! Brace up to face Amma's Avatar- Rudravatar!
In all this ruckus, one man will be happily drinking and making merry- our Captain.
Quoting him, "Nan etho thappu thappa solrein, illa?" ( I am telling something wrong, ain't I?)