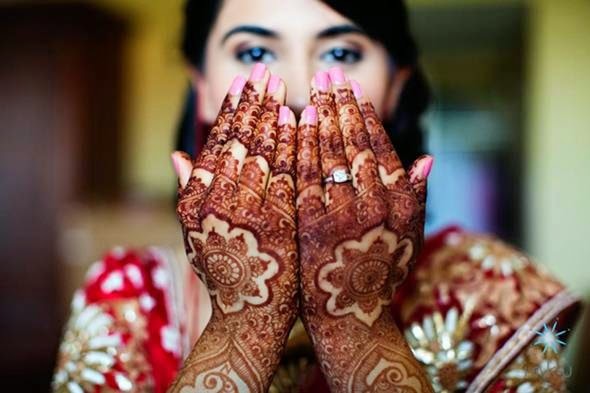 The mehndi looked a tad too bright. Sunlight streaming through the windows gave an ethereal glow to the small room. She lay still, studying the intricate patterns of mehndi. All woven in narrow loops, entangled in a web of crimson orange. Her husband of a day was snoring beside her, content and happy. Bringing her palm to her nostrils, she inhaled the fragrance of henna. Her eyes closed instinctively, memories came flooding back.

The sun beat down mercilessly on a hot April afternoon when she decided to apply some mehndi. A visit to the neighbourhood parlour was what she wished for a long time, a fetish…as she had toiled for her semesters. Dupatta tied around her cherubic face, with coolers shading her eyes, she took off on her bike. That was when she saw him. The same chocolate brown eyes bored through her jet black ones.

Picking up speed, she evaded further scorching looks from him. His mother, Susan auntie always loved to pamper her with sweets. She had a sweet tooth and aunt knew how to pull the strings. A visit to her house always brought silent stares from him- aunt’s only son. She always felt his eyes bored into her soul, he seemed to know the deepest secrets lying in the endless abyss that she called her heart. All through the childhood years, he had been a withdrawn, yet intelligent child. The teen age raging hormones did nothing to his demeanour. She loved their companionable silence.

It was after applying the gooey mehndi did she realise she must have come walking. She kicked herself mentally for bringing her bike. As she stood on the parlor’s steps waiting for her mehndi to dry off, he came. Picking her keys from her outstretched palm, he started the bike and waited for her. Frustrated at his silence, she blew few unruly strands of hair across her face and sat behind him.

The wind ruffled his hair as the bike rolled down the narrow alleys. She fought the urge to run her mehndi laden palms through his soft hair that glistened in the sunlight. She had been waiting almost four years now, for him to open up- to say something, anything. His looks were always clear, what she never comprehended were his words. Mumbled and crushed between breaths. He was never the talking one. The bike neared the last turn to their street and that was when she licked her dry lips and whispered in a low voice, leaning unto him- “I love you”.

What happened next was something she can never bring to remember again. All she could remember was the chaos, the smell of burnt rubber, blood and loud shrieks. It took her few minutes to register her vocal chords were straining from her shrieks. The truck had stopped finally. He lay still. No wounds. Nothing. Only a trickle of blood from his ears and another from his nose. Tears streaming down her face, she reached out to him. His eyes- they told a hundred stories. The look of love, want, desire...time went still.

She fought to blink back her tears. It has been four more years waiting for him. Everyday she dutifully visited him. He had withstood a tracheotomy, always surrounded by tubes and wires. Yet he was nothing. A vegetable. Breathing, never feeling. Suspended in a void. She talked to him in soothing tones. She told him how bright a future they would have. The children they would have. The arguments, the endearments. She laid her soul bare for him. For him to wake up one fine day from the coma and look at her with those chocolate brown eyes.

The last time she visited him was two days before. She had foolishly hoped one day he would come back. That was never to be. Susan auntie fumbled with his clothing as she arrived and she helped her dress him up. All dolled up, eyes closed, he looked handsome and full of life. She held his fingers in silence. A tear rolled down her cheek. Words failed her today. Tomorrow would be her wedding. She was leaving town soon. This ritual would stop. Should stop.

He could see her totally broken today. She was in shambles, a solitary tear rolling down her porcelain cheek. He wished to wipe it away with his kisses. Why was she crying? She was always strong, vibrant and hyper with life.  He was hurting. How he wished he could open his eyes and talk to her...hold her hands...smell the mehndi...

Where was she? He ached to see her. Didn't she promise to see him and talk to him everyday? Was that screeching of car tires he heard? The sound died down soon and a cloak of contentment spread over him. He never wanted to wake up again. All he could now see was her palms- intricate patterns of mehndi adorning them. All he could inhale now was the alluring fragrance of mehndi.